It has been officially an eon since I last had a free afternoon to sit and putter around with my art supplies. Feeling unfocused, I decided that drawing something already in existence was probably the best way to exercise my precision, and I chose the smokin’ red dress that Rhianna wore to the Grammy’s!

In my Illustration class review, I was told that I should work more on texture and on faces. I thought this would be a good choice because of the gathered skirt and translucent silk.

Getting started was harder than I had thought, as I tried to remember the techniques I had learned months ago. I got started in pencil and took a pic so I could see what I’d started with by the time I was done. Lucky for me this time, I was already sold on drawing a long skirt so you didn’t have to see her weird looking cartoon legs…. 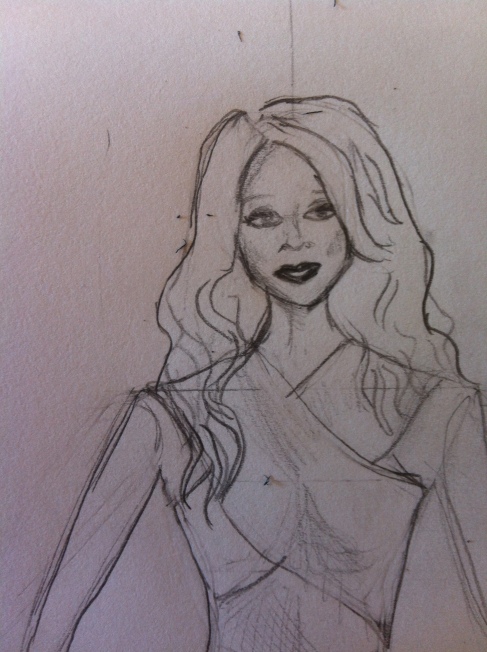 Her arms were looking a little wonky and her face was so small that my pencil could hardly make details, but overall I was pleased enough to move on. After all, I had to accept that I will not be turning into Michelangelo in one afternoon of drawing.

Then there was the coloring! After outlining in thin Staedler marker, I decided that I would mix it up and use only my PrismaColor colored pencils this time. Previously, I had been using mainly my markers, but wanted to work with a medium I was less comfortable with. Here’s what came out: 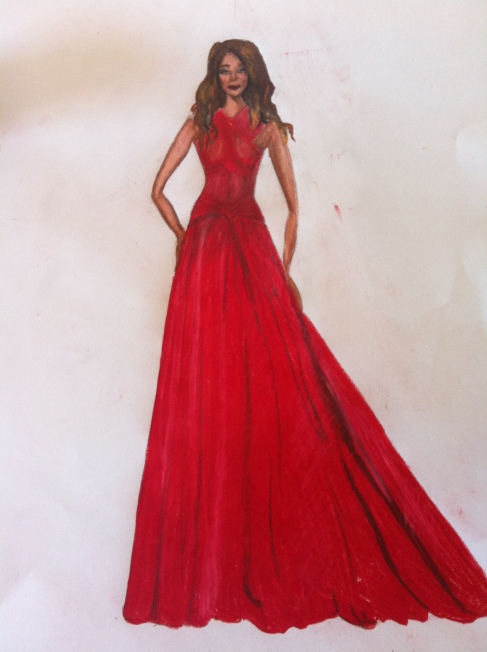 Riri was looking a bit better at the Grammy’s, but I took away some great observations about my process and where to go from here. Somewhere along the line her hair grew, her smile got colored in, and the precision of the folds in her dress became muddied. I had a hard time getting her hair to catch that ideal ombre glow and had an even harder time getting the beautiful coloring of her skin just right. This led to over-compensation, and I couldn’t color any more unless I wanted to just draw right through to the next page.

All in all, it was a good checkpoint. I want to try this dress again, but instead use markers and spend more time on the details of her face and hair. I’ve heard designers say that more often than not a croquis gets drawn and redrawn multiple hair-pulling times until it is just right, but if I sit and roast any longer inside on this beautiful, hot day I think I will go insane in the membrane.

On a positive note, I’m actually pleasantly surprised with the experimentation I did to make the fabric appear to be sheer through her torso and her face didn’t look like a man. These are both going in the “win” category.

I’m excited to try this again, and definitely will plan on more time for details. I think next time the most important part will be measuring and not second guessing my measurements. I got caught up in details that were not to scale and I lost focus of the precision that could have added some points for technique.

As we say around here:

It has been awhile since I pulled out my beloved Prismacolor markers and pencils for a little drawing practice. Turns out, I think I need more of it… (as if that wasn’t blatantly obvious) . I decided that today I would try designing something that I would wear myself and that would suit my lifestyle. I wanted to incorporate design elements that I love from my wardrobe with trends I’m loving right now. Most importantly, I wanted to design something I thought would be wearable. So often I get excited to draw funky furs and intricate lace, that I wanted to think inside the box. Realistically speaking, we dress “inside the box”, (i.e., I’m not going to wear this to the grocery store…)

If I wore that, the people at the grocery store would probably think I had just done an embarrassingly bad job of stealing from the meat counter.

You get the point. The thing about fashion is that there needs to be a certain amount of digestibility (no pun intended…). I’m not going to wear something weird or over-the-top, so I need to think about how I become a more versatile designer also- one that clothes people who go to the grocery store.

I’m absolutely in love with the maxi-dress and maxi-skirt takeover. I think that every woman deserves to wear gowns, even if that means they are just going to Trader Joe’s. Maybe that’s my inner pageant girl. Keeping this in mind, I decided to design a “grocery gown” suited to my tastes!

This summer white jersey knit has a cowl neckline and stops just above the ankles! I wanted to incorporate the black & white stripe trend and the graphic tee trend, but I gave it a twist by making the stripes silver. Balancing with fabric and graphics is a good way of eluding to that hourglass shape, especially since many women are smaller on top. 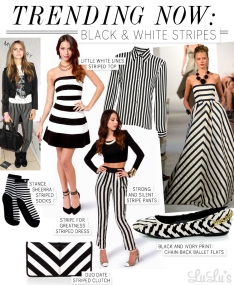 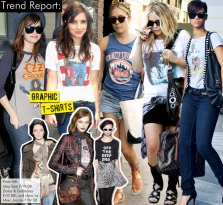 Also, I wanted to make sure that it was short enough to be worn with any shoes, so you can show off when you find cute ones like these that I found on Polyvore! 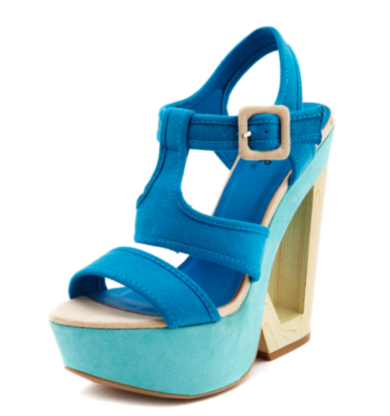 I had a difficult time trying to mix the colored pencils and the markers in the drawing. You can tell especially by the shotty shading on the skirt and semi-contorted foot. I never said I was the best drawer. I’ve determined that for the time being I should stick to one medium until I’ve honed my skills.  I definitely see where I can improve, but was having so much fun putting this one together that I couldn’t be bothered with creating a masterpiece. I’m happy with the mind exercise I was able to get from the experiment, and it is definitely therapeutic to spend some time engrossed in a coloring project!

It’s funny, I realized if I was going to draw myself I needed to use a bright red marker for my hair… something I’d not yet done. One of my wonderful readers has suggested a caricature superhero for Dorky Chick in Lipstick so stay tuned, more red-marker hair to come 🙂 Maybe this guy will have some pointers for me….

Anyways, another drawing done and just in time to get ready for work. They say “practice makes perfect” but I say practice makes me hungry.