Roughly twice a week, I open my mailbox to find envelopes filled with articles clipped from the Des Moines Register and Wallstreet Journal from my dad. A daily newspaper reader, he is famous for sitting and reading with a pair of scissors for cutting, folding, and mailing to loved ones he thinks may take interest in the material. My mailbox usually gets articles on former classmates and WHS happenings, wine, golf, and, of course, fashion.

Can you blame me?

While all of the articles are fantastic, one stood out to me recently and led me to a fantastic afternoon adventure. It was an article featuring different fashion exhibits around the world, one of which was in Seattle, called “Future Beauty”. So when I realized that I had a trip north planned in just a couple weeks, I marked my calendar and got the deets.

To set the scene: it was a sunny Thursday with smooth sailing on the interstate, I got a free ice cream cone at DQ because corporate didn’t pass the memo about Miracle Treat Day, I got the king spot in the parking garage when they were at max capacity, AND I found a red sequin dress that was made for mischief on super-sale. So I had a feeling this trip to the Seattle Art Museum was going to be great, and I was right.

Essentially, this exhibit showcases pieces of couture fashion from Japanese designers over the past 30 years. This is the stuff that design dreams are made of.

The ornate details! The unusual silhouettes! The innovative construction! Oh how my heart was singing!!

For those who are not familiar with Japanese fashion (it’s okay- I’m still learning myself), it is an important distinction to make from the rest of the world. Boundaries are unclear and tradition is void. Appropriately named “Future Beauty” the overwhelming takeaway for any non-fashion-minded individual would be that Japanese designers see fashion as limitless and with the ability to transcend time. Much of the world’s clothing is still governed by function, but in Japan the fashion on the streets can sometime be more obscure than what is on the couture runways. The exhibit included both couture and street wear. Some of the labels on the displayed looks even said “street fashion” as opposed to being from a designer. Crazy right? Mostly,  the exhibit consisted of a sizable collection of runway pieces and included names like Rei Kawakubo (Comme des Garçons), Yohji Yamamoto, and a smattering of other noteworthy people I will let you research 😉 but let’s get to the goods– pictures!

Just LOOK at this stuff! 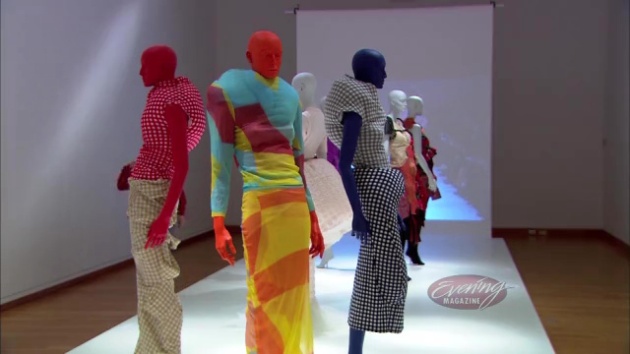 I had to snag pics for you online because while I was in the exhibition I felt like it was a sacred ground. The hushed whispers of the patrons made footsteps seem to echo louder. I think music would have caused sensory overload because the lights and the angles and the intrigue of each piece had a visual decibel level high enough to wake the neighbors.

My favorite piece came  from Yohji Yamamoto and was made of a thick, woolen felt. I was dazzled by so many pieces, but this one wasn’t the most flashy or jaw dropping. This piece was was austere and sober, yet remarkably regal. I’d costume it for a futuristic action movie. It seems fit for a doe-eyed, stoic villain in a modern-day castle somewhere in a snowy part of the world. Don’t you think? 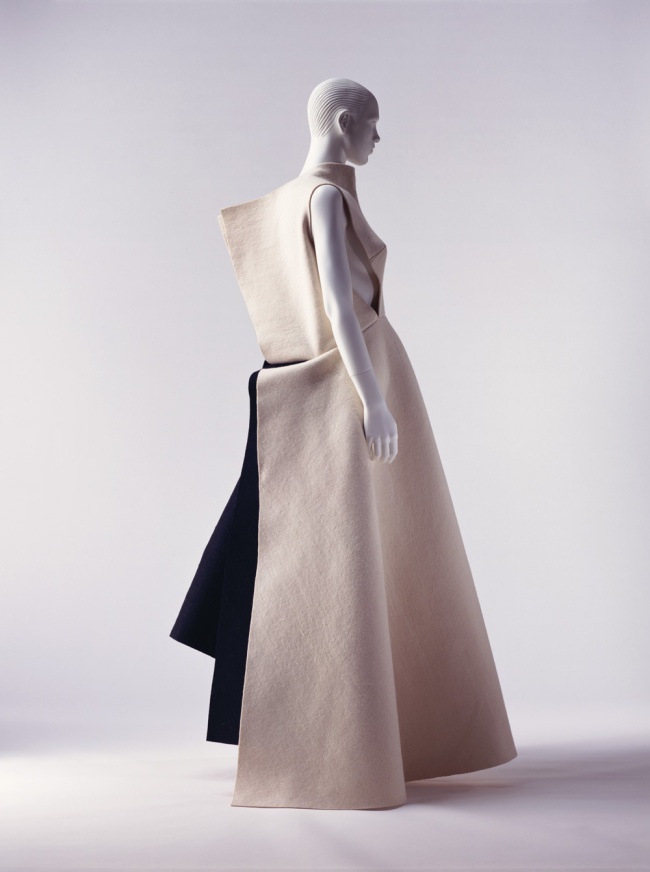 Though many designers have influenced the state of fashion to date, there is something about the philosophy of these Japanese designs that was cohesive. This perceived commonality was the reminder of the importance of play in design. Each design appeared to have intent to reveal the expanse of the muse, like a child who colors outside the lines and makes purple hair because that is what inspires them. Instead of saying “no” that isn’t how it’s done, the designers took their pencils a bit further to create new shapes, surpassed conventional fabrics for avant-garde materials, and selected colors based on doing whatever the heck they wanted to do. The designers said yes to thoughtful innovation and yes to unabashed play.

I thought about picking up one the luxuriously clothed mannequins and taking it with me, but then I didn’t want to take it away from it’s mannequin friends. So I left with my appetite for culture fully satiated and swirling ideas for future projects. Bring on the playtime.

To anyone who is in the Seattle area: I believe that the exhibit will be up for another week or so, so scurry over there and check it out- definitely worth a trip.

School starts again in a couple weeks, can you believe it? Am I still a student? Oy vey. I am really looking forward to all of the fashion related events that I’ve been plugging into my iCal. I’ve got a few projects in the works, pending responsibilities, and a slew of fashion shows to get me excited in addition to some new fashion classes. Big stuff- stay tuned!!

Well thanks, Dad, for sending those articles my way. I wouldn’t have gotten that unique experience if I hadn’t known! And just so you all know, summer is officially over. I’m visiting my folks this week and tonight my dad announced that today is the last day he will be wearing his seersucker suits and white shoes.

Cheers to wearing white this weekend and catching the last of the summer sun! Happy Labor Day!